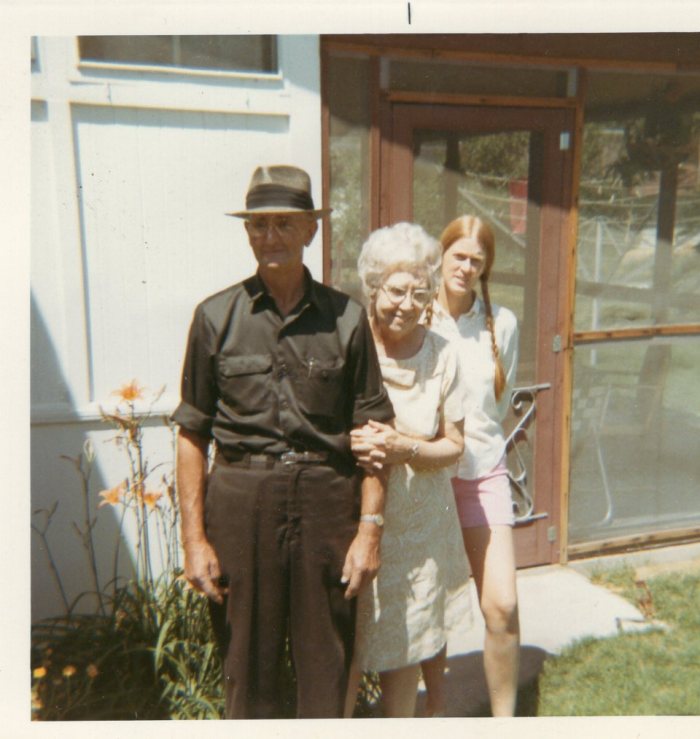 Above: Otto Foltmer with my Mom and my wife circa 1960.

My step-father was a small farmer. He worked with his hands all of his life. He worked with mules, horses, and later tractors. Otto was primarily a wheat farmer. He took pride in his farming. Straight rows, sowing at the right time, cultivating, knowing when to harvest. There was a German Lutheran toughness to him and a real pride in growing crops and beasts to feed the people.
It was a real shock to him when he made his first trip to the east coast. He went up to the top of the Empire State Building and looked out over the city. He noticed barges in the Hudson River that were dumping their loads into the river. He asked what they were dumping. He was told they were dumping excess wheat and also milk. He could not believe it.
Why would they do that he asked. For the futures market he was told. Too much wheat brings the prices down now and in the future.
When he came back to the farm he was changed. Those barges had stolen his life’s purpose.
At about the same time Camus was writing his Notebooks 1951 – 1959. He writes (35) :
According to Melville, the remora, a fish of the South Seas, swims poorly. That is why their only chance to move forward consists of attaching themselves to the back of a big fish. They then plunge a kind of tube into the stomach of a shark, where they suck up their nourishment, and propagate without doing anything, living off the hunting and efforts of the beast.
The remora reminds me of the rich speculators of today. They do not produce any wheat or corn – they merely bet on its price in the future. And they don’t manufacture anything to use for anything – they specialize in gambling.
Oh, yeah, and Otto paid his fair share of taxes.

And one of my favourites: