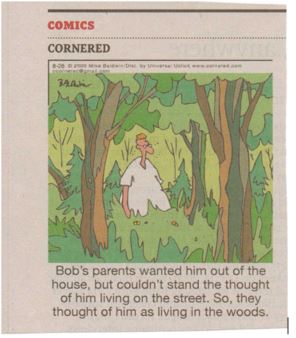 SOME YEARS AGO, being with a camping party in the mountains, I returned from a solitary ramble to find every one engaged in a ferocious metaphysical dispute. The corpus of the dispute was a squirrel – a live squirrel supposed to be clinging to one side of a tree-trunk; while over against the tree’s opposite side a human being was imagined to stand. This human witness tries to get sight of the squirrel by moving rapidly round the tree, but no matter how fast he goes, the squirrel moves as fast in the opposite direction, and always keeps the tree between himself and the man, so that never a glimpse of him is caught. The resultant metaphysical problem now is this: Does the man go round the squirrel or not? He goes round the tree, sure enough, and the squirrel is on the tree; but does he go round the squirrel? [Stop for discussion] In the unlimited leisure of the wilderness, discussion had been worn threadbare. Every one had taken sides, and was obstinate; and the numbers on both sides were even. Each side, when I appeared therefore appealed to me to make it a majority. Mindful of the scholastic adage that whenever you meet a contradiction you must make a distinction, I immediately sought and found one, as follows: “Which party is right,” I said, “depends on what you practically mean by ‘going round’ the squirrel. If you mean passing from the north of him to the east, then to the south, then to the west, and then to the north of him again, obviously the man does go round him, for he occupies these successive positions. But if on the contrary you mean being first in front of him, then on the right of him, then behind him, then on his left, and finally in front again, it is quite as obvious that the man fails to go round him, for by the compensating movements the squirrel makes, he keeps his belly turned towards the man all the time, and his back turned away. Make the distinction, and there is no occasion for any farther dispute. You are both right and both wrong according as you conceive the verb ‘to go round’ in one practical fashion or the other.”

END_OF_DOCUMENT_TOKEN_TO_BE_REPLACED

Recently I reviewed this book for metapsychology.

Thanks so much. I enjoyed your review and am glad you liked the book. A bit puzzled by the link to Metapsychology, but it somehow makes Machiavelli even more interesting.