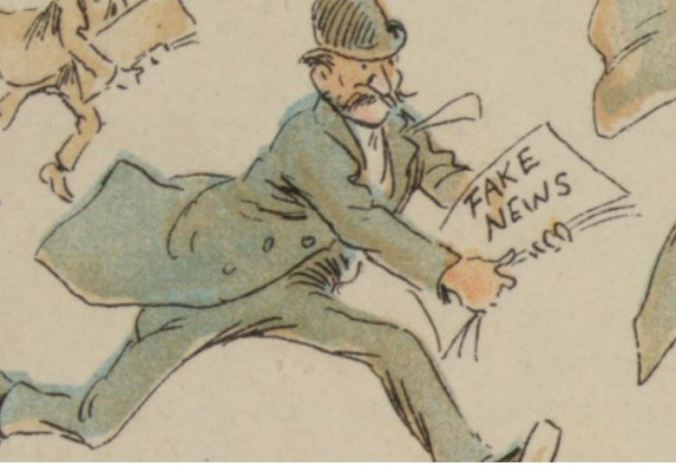 FAKE NEWS IS STILL WITH US.

In February we talked about Fake News, False News, TRUTH, and truth at the downtown library. Here is an outline of stuff and some links.

The BBC defines fake news as false information deliberately circulated by hoax news sites to misinform, usually for political or commercial purposes… It is worth differentiating fake news from false news, a term sometimes used interchangeably by some politicians to dispute news reports with which they do not agree or which they dislike. Guardian

There has been much commentary about defining the phenomenon of fake news, with some commentators blurring the lines between completely false stories, farmed news and more difficult cases such as heavily spun or partially inaccurate news…

The Guardian readers’ editor has proposed the following draft definition – “’fake news’ means fictions deliberately fabricated and presented as non-fiction with intent to mislead recipients into treating fiction as fact or into doubting verifiable fact.”

The democratisation of information online – which has caused many to describe this as the Golden Age of Journalism – has also led to a situation where credible impartial news sources are placed on a par with hoax websites and hyperpartisan websites claiming opinion as fact.

In the past year – new websites have sprung up posting unverified and untrue information, which has been widely shared on social media.

It falls into several different types:

3)      Sites which mix fact and fiction – without traditional editorial standards they publish some true stories and some fake stories which get widely shared. This may include misappropriation of content by third parties, which may distort the material to suit their political agendas

While the above encapsulates what ITN recognises as fake news the definition of the term is shifting and has now arguably been misappropriated to become a catch-all phrase for coverage you disagree with.

This term has been quite regularly applied by President Trump to mainstream media for articles that do adhere to journalistic standards and ethics – and which mainstream media would strongly contest is “proper” journalism. This sets a precedent for other organisations and governments to dismiss critical stories as fake.

Meanwhile, the Chinese government recently described reports of torture from a human rights activist as “fake news”. This demonstrates how the terms has become a method or strategy enabling those held to account not to engage with genuine news reports and instead dismissing media who question them by labelling their reports as “fake”.

The consistent misuse of the term fake news in turn dilutes and undermines the label when it is accurately applied to articles that publish falsehoods. It could be argued that a new term or label needs to be found – although this too risks misappropriation

Fight back! Sites to help in checking the veracity of memes, claims, etc.