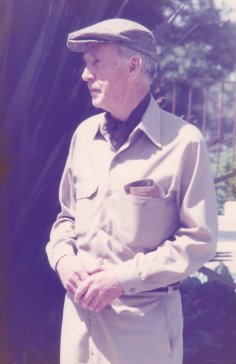 A few words about my UCSB mentor/professor/friend:

Some time ago I received an interesting request to say a few words about Douwe Stuurman, who was my supervisor at UCSB. Here is the exchange.

Many of the Plato Club students went on to become academics. I suppose most of these self-identified as Christian scholars, but not all—a significant minority put lesser or greater distance between themselves and Christianity.

I’m planning to do capsule biographies of some of Jellema’s more talented students in the 1930s and the 1950s. (Stuurman was class of ’31.) I want these to show the variety of directions (intellectually, philosophically, and religiously) that Jellema’s students ended up taking. My goal is to draw lines of continuity and discontinuity between Jellema and his academic “progeny” to see what can be learned from that.

By the way, the reason I’m not doing students from the 1940s is because Calvin’s leadership all but forced Jellema to leave. For 11 years he chaired the Philosophy Dept at Indiana University before returning to Calvin. Part of the reason he was run off is because he was fond of asking students hard questions (e.g. about the problem of evil) and he willing to leave these questions unanswered, which of course left students to stew over them. The best students loved it; the conservatives who controlled the Christian Reformed Church at the time couldn’t stand it.

Feel free to skip any questions you feel you can’t answer, but for the ones you can, it would be extremely helpful if you could give me a brief illustration.

Here’s context: Stuurman did his MA thesis on Plotinus; this is no surprise to me because Jellema was a Platonist. The crucial choice here for Jellema was idealism vs naturalism (the term Jellema preferred instead of realism). Jellema wasn’t a Kantian idealist, ie, there is no reality except ideas. Jellema thought matter was objectively real. But the issue for him was the nature of values like the good, the beautiful, the true, which he believed are as real as matter. He thought that if you aren’t an idealist then values can’t be real; they have to be epiphenomenal (ie products of physiological processes) and subjective. But he thought if you believe that the good, the beautiful and the true are objectively real (and for him, universal and eternal), then you have to be an idealist.

Context: Jellema’s way of doing philosophy was actually very historical, and it had two signal characteristics. 1) His lectures are sometimes described as “the drama of the panoramic sweep of ideas,” for he specialized in painting the big picture, making connections, and carrying a few key themes throughout the different philosophic periods. (He usually lectured without notes, and students were spellbound.) 2) He was also fond of talking of “the mind of an age,” epitomized in a given text or set of texts. He divided Western intellectual history into four minds: The Ancient Mind (Plato’s idea that humans are rational beings seeking the eternal), the Medieval Mind (the Christian answer to the nature of the eternal that humans seek), the Modern Mind (replacing the Medieval answer with science and naturalism), and the Contemporary Mind (the emergence of relativism as the logical consequence of philosophical naturalism. So I’m wondering here if there were any echoes of these characteristics in Stuurman’s lectures?

Context: It’s clear from student reminiscences that Stuurman was a brilliant lecturer, so here I’m wondering about his style in smaller seminars. In smaller classes Jellema loved to teach by the Socratic method: he would pick a student at random, ask what seemed an innocuous enough question, and then keep asking deeper questions that would ferret out overlooked possibilities, unexamined assumptions, and the like. But he was always genial and encouraging about it, so that even when students floundered, or talked themselves into a corner, they never felt bad about it. (However, when his brighter students used this form of questioning on the other professors in order to harass them, look out! It generated a lot of resentment among some of Jellema’s colleagues.) Here again, I’m wondering if there were any echoes in Stuurman of Jellema’s “teaching by asking questions.”

OK, I’m sure that’s more than enough. Please don’t wear yourself out over this, but any help you could give me in drawing lines of continuity or discontinuity between Stuurman and Jellema would be much appreciated.

Thanks again, and I hope all is well with you.
Mike

It was Stuurman’s brilliance as a teacher that launched me on my own career. He became a friend of the family and visited us in Canada after we moved here. He was an existentialist who constantly reminded us to live in the moment to the best of our ability – “life is a scene; not a plot,” he would say. As a graduate student I did a directed studies course with him on Camus. It was excellent: read Camus’s books in English and write a paper on each. It was actually fun to do!

Stuurman on Platonism: Plato was the worst thing that ever happened to the world of ideas. Plato’s other-worldly make-believe had directed our attention away from the world of reality, the world of the senses, the natural world; and his world of Forms had done terrible damage to the human condition.

On religion: Atheist. Made fun of organized religion and its practices. Used a rich vocabulary from religion (the elect, redemption, sacrifice, etc) but only to contrast it to an atheistic existentialist attitude. He gave a lecture (at my invitation) at the Unitarian Church in Santa Barbara to a rapt audience about the early stories in the Hebrew Bible. He had dismissed Calvinism by the time I studied with him and spoke of it as a silly belief system spawned by an up-tight death fearing leader. Religions were all merely fictional attempts by death fearing individuals to assuage their fears.

When I was his TA for the two years at UCSB he taught large lectures, and had his TAs hold the seminars. He met with us every week to go over the material to be covered and to discuss ideas about how to teach. I remember a student evaluation of his Continental Lit course. I lectured in it on several occasions and the evaluations indicated that students liked the “team teaching” we provided. S provided the BIG picture and I insisted on close analysis of the text.

S and I talked a lot about the early days at UCSB after I had come to a new college here in Canada. Yes, in the early days he was trying to keep USBC more like Reed College and less like UCLA. Hardin was a friend and colleague, as was Kelly in math, and an artist and a historian. They used to play golf and hold discussions every fortnight. S believed that art was the highest achievement we humans are capable of and that reading, particularly Proust, was the only salvation available to us. Interestingly though he was also a capable carpenter who, when he visited us once, remodeled (minor but difficult) our living room to open it up to light. He also went for long walks on Gabriola Island and purchased a miter box (still have it) so he could make some picture frames for some of our pieces.

S talked about escaping from the CRC and from Calvin.

I have a copy of S’s reminiscences for the student newspaper when he retired from UCSB and there he writes about the importance of teaching and being honest (‘authentic’) in the craft of teaching – reading books and talking about them. He was a great influence on me. I last saw him when the devils of Shy-Drager had attacked his body. He had to be helped to walk.

I miss him still. We talked on the phone, exchanged a few letters, and to this day I can hear him Stuurmanizing from time to time as I “walk toward my grave”.