William Shakespeare is simply the best playwright in the world. Ever. His works have inspired millions and have been translated into multiple languages and multiple media. I was lucky to have studied him at the University of California with Professor Homer (Murph) Swander, who brought the pages of the texts to life in brilliant lecture/performances. I took Swander’s Shakespeare class as an undergraduate and was hooked. On the first day of class he came into the room, closed and locked the door, and introduced himself.

Then he said: “There is only one person who can come late to this class. I am that person. If the door is closed and locked then you are not to knock or try to enter.”

He sounded a bit like a US Marine Corps drill sergeant.

But soon I realized that once he started his lecture/performance interruptions were intolerable. He was that good. And he challenged me. And I responded.

Later as a graduate student I returned to study with Swander again: Shakespeare and Elizabethan drama. In those few years between undergrad and grad school Swander had converted to Catholicism. That gave him an approach that insisted on a single correct reading of the plays – a reading that was backed up with argument, close analysis of the text, and not mere authority. He listened to counter arguments and again I was challenged. He taught me and many others a great deal. I went on to teach Shakespeare and took several classes of students to see their first plays at the Oregon Shakespeare Festival. 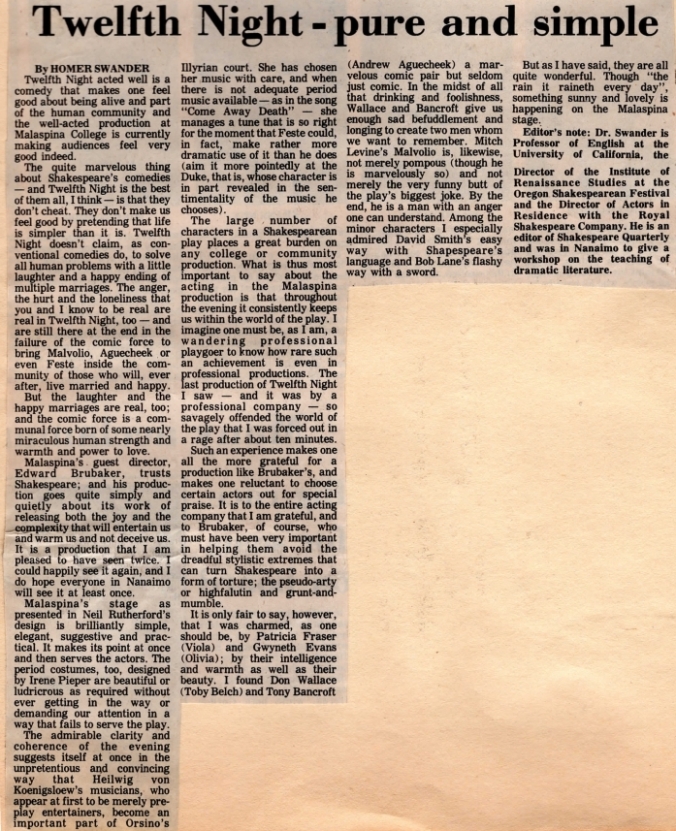 One thought on “Great Professor #2”