“Let us be grateful to people who make us happy: they are the charming gardeners who make our souls blossom.” – Marcel Proust

HARDIN: Well, he’s one of a kind. He was one of the spearheads of the movement to keep this [UCSB] a small liberal arts campus. He was, as you know, at Oxford–a Rhodes Scholar–and very much a lover of humanities in a traditional sense. I don’t know how one could summarize him. You know plenty about him anyway. He’s quite unusual. [from UCSB interview]

Remembrance of things past: It is appropriate  to think back on the year and all of the years that have slipped by so quickly, and it is appropriate to begin with a Proust quote, for the subject of this remembrance was a great Proust student: Douwe Stuurman. University of California Professor Stuurman. My MA advisor for my degree in English. A man who influenced generations of students in his long teaching career. A mentor, teacher, friend.

I wrote of him in my first book:

After a few years in public schools and four years in the United States Marine Corps, I learned about sex and violence in more direct ways, and stopped reading the Bible until I was in university. At the University of California in Santa Barbara I was assigned as a teaching assistant to Professor Douwe Stuurman, who taught a course on the Bible. His classes were always full of interesting people. In the front row were the nuns, who, he said, were there to spy on him. Then came the middle-aged students looking for therapy, the literature and philosophy students, and the atheists who sat in the back. I tried to sit in a different part of the room each time. Stuurman had a Freudian, Eastern, Calvinist, Proustian background and the ability to mesmerize an audience. Above all he opened up the text for me. I read it with fresh eyes. These stories were marvellous works of art! Stuurman’s lectures were inspiring (I used to call them “Stuurman on the mount”) and unlike my Lutheran pastor, he asked questions all the time. When not at the university I spent my time cleaning the Unitarian Church in Santa Barbara, which meant that I had the opportunity to talk with Lex Crane, who was ministering there then. His background in literature was extensive and we used to have long talks about “meaning” while I should have been cleaning the toilets. I flirted with the idea of becoming a Unitarian minister, but never got the “call.” Because of this and more, I believe the Bible is worth reading and studying, not as moribund scripture but as living literature. [Source]

Another of his students writes,

Douwe Stuurman, a professor I had at UCSB, used to tell his students to “live vulnerably.” I’ll never forget this lesson; it’s the best way to approach new experiences and combat ”the boring routine.”  [Source]

The late professor Douwe Stuurman, for whom I was a reader at the University of California, Santa Barbara in the late 1970s, once asked the 500 students in a lecture hall how many of them wanted to be writers. About two-thirds held up their hands. Then he asked how many were actually writing and most of those hands went down. “A writer is someone who writes,” he said. “The rest of you are just dreamers.”

Jerry Knoll and I were TAs for Stuurman in his continental literature class back in the 60s. We were walking with him back to the department after he had lectured on Camus’s The Stranger. Stuurman had closed the lecture at the end of Book One by saying, “Repressed emotion will eventually explode.” Walking along talking about the lecture and the book Knoll said, “That was a powerful ending.” I said, “I wish I had said that.”

Stuurman looked at me and said, “You will.”

And of course I did.

Our daughter visited Stuurman once in Santa Barbara. When she knocked on the door he put down the phone and welcomed her, apologized,  and told her he would be finished with the call in a moment. She discovered he was talking to Peter DeVries. She was impressed. Later he drove to Nanaimo in his VW Beetle to attend her wedding.

Stuurman taught some of the most popular courses in UCSB history: Continental Literature, The Bible as Literature, Existentialism, and he also always taught a continuing education course. He was good. He was a quiet lecturer – people would be sitting forward on their seats within two minutes of the start not wanting to miss a word. He rarely used notes, delivering what he called “a private report” to a rapt audience.

My friend John Marshall and I visited him just before he died. He took us to Solvang and bought John a small gift. When we got back to Canada John wrote a poem for him as a return gift. 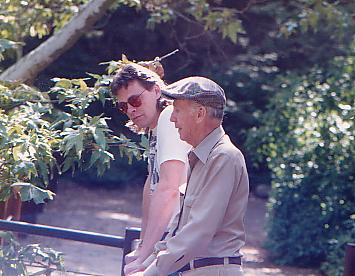 from the dam to the mission,

built it under supervision

At the Botanical Gardens

we take turns talking to trees.

At a double redwood trunk

he quotes a man of virtue

out of the blue. Frail,

what you will love most

and he makes you drive

to walk. To where

the wild meadows were.

He wants you to see everything.

but up and about you get Reed in the thirties

of one man’s half-century

And if one of your stories is well told

the praise is in saying

to love to know.

And when you leave

he presses a cloth bag

in your other hand.

He’d gone into the Gift Shop

this day you thought you were waiting

while he had a piss.

Now you remember the way you felt,

Your stepfather slipping you

to help you on your way

when it was time to leave.

And how they left their hands in ours

gave us all we needed.

One thought on “Remembering Professor Stuurman”