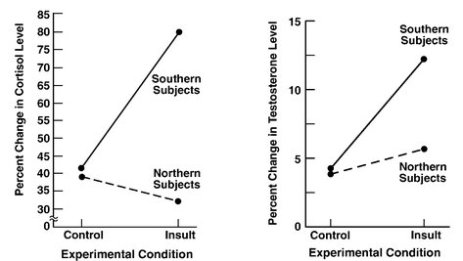 I’ll get to the above graph in a moment, but first I want to tell a little story.

A man sits in a bar with a bunch of his friends one evening. The group is having a pleasant night out until a stranger walks up to the table and speaks insultingly to the man. He sneeringly claims to have been having sex with the man’s fiancée on an ongoing basis, and states that he and the man’s fiancée have had many jokes about the man’s diminished sexual attributes and abilities. Hey lays it on pretty thick for another minute and then says, “I’m heading out to the parking lot now, and if you’re any man at all — which we all know you’re not already — you’ll follow me out and prove it.” What should the man do? When asked about cases like this, men and women from the southern US were much more likely to think that the man should go and punch it out, however bad the fight may be. While northerners, on reflection, tended to think that the moral course of action would be to ignore the provocation and laugh off the stranger’s insults, southerners tended to think that one wouldn’t be ‘much of a man’ if he didn’t respond with violence.

This and many similar cases are discussed by Richard Nisbett and Dov Cohen in Culture of Honor: The Psychology of Violence in the South. To further explore the different ways northerners and southerners think of fighting to defend one’s honour, they sent off job applications to businesses in Michigan and Tennessee with bogus resumes and cover letters. These letters were all the same except for one crucial difference. Half the letters sent to employers in each state ended by admitting that the writer had served time for a felony — beating another man to death outside of a bar in a fight that got out of hand after the other man had insulted the first man’s wife. The other half also confessed to a felony, but this time it was stealing expensive cars from a car lot when the writer had no other way to support his family. The results were curious. The applications that confessed to stealing the cars were rejected by all employers, and the northern employers similarly wanted nothing to do with the man who had beaten someone to death outside the bar. But the southern employers tended to feel quite differently about the man who stood up for his wife’s honour. One wrote to applaud him for his honesty in admitting his criminal history up front, and said that it sounded like one of those understandable but unfortunate things “that could happen to anyone”. Another southern employer expressed regret that he didn’t have a job opening at present. And so on.

Nisbett and Cohen wanted to investigate these differences in aggression in a laboratory setting, so they invited male students from northern and southern backgrounds to come in for testing. First, the subjects gave a saliva sample that was analyzed for cortisol and testosterone levels. Then they were told they needed to give a second saliva sample in a different room down the hall. The hallway was narrow and Nisbett and Cohen had stuck a filing cabinet against one of its walls. As the subjects walked past the cabinet, a rather muscular-looking confederate (chosen for the confederate’s protection) suddenly opened a drawer, making the subject bump into him. Then the muscular confederate muttered ‘Asshole’ under his breath. A control group of northern and southern subjects walked past the same person and cabinet, but with no insult. Right after this, the test subjects gave their second saliva sample. The results are depicted in the graph above.

In these and many other fascinating studies described in their book, Nisbett and Cohen reveal quite sharply different attitudes toward violence in northerners and southerners. But importantly, the southerners are not tolerant of all violence, and many types of violence turn out to be at least as hateful to them as they are to northerners. Southerners tend to take a very dim view of random violence, violence against women, or violence used or threatened in robberies. The violent acts that elicited startlingly different moral assessments all had to do with the preservation or restoration of honour in the face of an insult: an insult to oneself, to one’s mate, to one’s sister, or to one’s parents (particularly one’s mother).

Why would southerners tend to support a violent culture of honor? Objectively speaking, such a culture seems to be a losing proposition. A culture in which everyone can laugh off insults or resolve them non-violently is a culture where everyone’s chance of living a long and injury-free life is increased. How could the southerners not see this? Perhaps the southern tolerance of violence in honour cases is a function of the relative poverty of the south, or the relative lack of education, or of the influence of religion. Nisbett and Cohen explore these options, but none hold up under scrutiny. Southerners who are well-off, highly educated and non-religious tend nonetheless to hold to a culture of honour mentality. However, the authors did discover a distinction along a double factor that traces the culture of honour line very accurately. Moreover, after investigating the influence of this factor in the southern US, they applied it to all other regions worldwide that have cultures of honour. Sure enough, this double factor turns out to reliably predict which cultures will tolerate violence in defense of honour and which will not.

The reason for this appears to be as follows. It’s comparatively easy to steal from an animal herder: animals are loose and mobile things and can quite easily be taken, even in large numbers. In the absence of a particularly strong and vigilant law enforcement system, the incentive for theft is very high, with opportunities abounding. But there are some people from whom animals would rarely be stolen: those who are believed to get violently angry if they even suspect you have ripped them off, and who would be likely to exact a terrible vengeance. And the most obvious way to indicate that you’re the type of person that no sane person messes with is to have a zero tolerance policy for insults against yourself or anything connected with you, and to publicly respond to transgressors with violence. While violence is generally a losing proposition, animal herders who let themselves be seen as men to be trifled with are at serious risk of losing all they have.

Things are quite different with farmers. Stealing a square meter of arable farmland or 200 pounds of harvested wheat from the middle of a farmer’s property — and then getting it home somehow — is considerably more difficult than slipping away with a herder’s sheep. Masked bandits can steal away all one’s cattle at once and never be seen again; but without taking over the entire town, it would be very difficult for a mob to make off with all the assets a farmer owns. A policy of violence comes with a cost that farmers, unlike herders, would be unreasonable to pay. But for herders, whether in Tennessee or Sicily, an aversion to violence is more expensive.

Nisbett and Cohen focused in on the areas in the southern US where they found the culture of honour to be most deeply entrenched. Not only were these the most herding-intensive regions in the south, but the ethnicity of the inhabitants was revealing. The settlers there were Scotch Irish, having chosen that part of the US to immigrate to because of its geological similarity to their homeland — where for countless generations, their ancestors had herded animals. The cultural incubation period for the culture of honour had lasted for generations.

Perhaps the moral of this story is that yet another difference in moral views is best explained not by good or bad moral perception, but rather by morally irrelevant factors. But another interesting lesson to take from this is that, if you’re worried that you’re on the verge of getting punched out at the bar, the best question to ask is “Hang on — do you happen to be descended from animal herders?”

16 thoughts on “Culture of Honour”